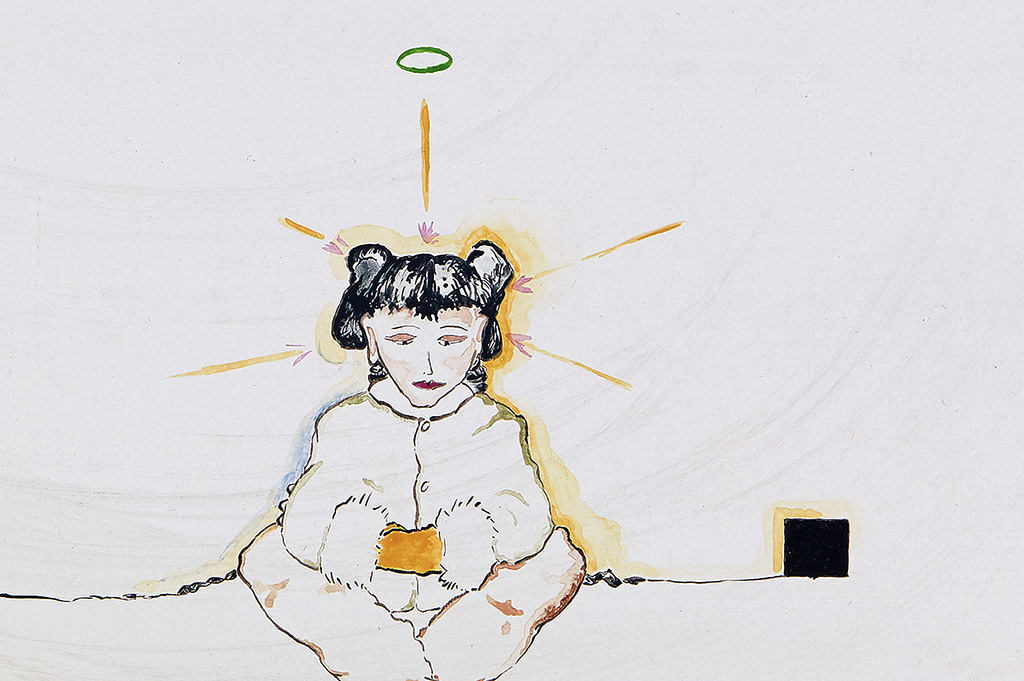 The Artericambi gallery is pleased to present “Ex voto”, the first posthumous exhibition in the gallery spaces, of the artist Delfina Marcello. The opening will take place on Saturday, 17 September 2022 at 5.00 pm.

The “Ex voto” exhibition, born from a communion of intentions aimed at remembering and making Delfina Marcello known, will focus mainly on her pictorial production. Through her painting and her graphic line, some of the thematic essences most dear to the artist can be observed, in particular those related to the femininity.

Delfina explore the concept of woman in its complexity and many possible facets: for example in the intimate and familiar one, presented in a series of family portraits and drawings on paper linked to the figure of the mother and using the unique style of the artist; or the one linked to the sexual sphere, illustrated in many comic strips; still the spiritual-religious one with the three Ex voto tables, from which the exhibition also takes its title, in which the artist thanks three women who have become Saints ending by connect herself with them. Even in the only video production on display, Il Bivio (2006), narrating the story of a journey between life and death, between dream and passion, the female figure will be at the center.

In memory of Artericambi’s first collaboration with Delfina Marcello, the ceramic plates used in the Fur-formance performance and its related video documentation made in the gallery spaces in 2002 will be exhibited.

“Ex voto” is part of the Delfina Marcello 2022 project, inaugurated with the exhibition “Delfina Marcello. Love Accessories ”in Venice, open from 2 to 30 September at the Oratory of San Ludovico, Calle dei Vecchi, Dorsoduro 2552.

Delfina Marcello (Venice 1966 – Mogliano Veneto 2017), a descendent of a patrician Venetian family, was one of the most original and independent artists of her time. Her work consisted as much of film, painting, drawing, photography and writing as of her way of being an artist and a woman – as everybody remembers her – rigorously faithful to the ethics of art and to herself yet with light- ness and allure. A graduate of the Courtauld Institute of Art in London, she expressed herself as filmmaker, painter, illustrator, and cartoon designer. In the 1990’s she worked in New York as script supervisor, sound and photography editor, and cinematographer for independent film productions. In the beginning of 2000’s she taught a master course in TV production and post-production at the University of Padova and art history at the Scuola Internazionale di Grafica in Venice.

She lived and worked in Venice, London, New York, Paris, Berlin, Milan and Mesenzana. She constantly experimented with different forms of artistic expression: from performance to video installation, from old painting techniques to poetry and prose. She wrote and directed short films and animations presented and awarded in major film festivals in the United States, England, Germany, Holland, and Italy.

“A video camera is a taming agent to me. Images are governed by an affective and organic process. I “play” with memory from the perspective of a gift and not a creation, grafting and instability instead of sprouting and opening. Memory becomes an “object” – soft and sensual, with the duty to omit rather than to be precise. The softness is the only transforming agent capable of infiltrating into any kind of system, it’s reproductive quotient has no limits, it’s a positive infection, the carrying element of mutation.”

(Flash Art June – July 2002). She wrote a historic novel, not yet published, entitled “Il medico di Dio” [God’s doctor] set in Venice of the XVII century with a strong component of metaphysics and philosophy which were subjects of her passionate studies.